There has been plenty of talk in the media recently about banks’ exposure to energy assets and the associated risks. Around the world, bank stocks have suffered as investors grow increasingly concerned about the ability of struggling energy companies – particularly coal, oil and gas producers – to repay their massive bank debts.

Australia’s big four banks are heavily exposed to fossil fuels, and our research shows that they are still as integral to the coal, oil and gas industries’ fortunes as they ever were. After analysing last year’s lending data, we can reveal the biggest lenders to fossil fuel projects and companies in Australia throughout 2015.

For a recap of our fossil fuel lending research from 2008 to early 2015, check out our Fueling the Fire report.

If your bank is listed in the table above, it is one of the biggest lenders to fossil fuels in Australia, using your savings to expand and prolong the dirty coal, oil and gas industries.

You can take action by putting your bank on notice, telling them if they continue to choose fossil fuels, you’ll choose a new bank. You can also check out our list of over 120 banks and their positions on fossil fuel investment, allowing you to find a bank that aligns more closely wth your values. The main reason for Japanese banks’ prominence at the top of the list is their involvement in a massive, multi-billion dollar refinancing of the Ichthys LNG processing plant in Darwin. The Ichthys refinancing alone attracted $6.80 billion (31% of all debt finance uncovered), while LNG-related deals totaled $12.50 billion (56%).

Japanese banks have also historically been huge lenders to coal in Australia. They need to get the message and start investing in a safer climate future rather than polluting fossil fuels.

While the value of loans flowing from the big four to fossil fuels in 2015 was somewhat dwarfed by the gargantuan LNG-related deals, the fact that at least one of CommBank, ANZ, Westpac and NAB was involved in 70% of all deals studied shows the integral role our major banks play in facilitating the expansion and extension of the coal, oil and gas industries in Australia.

The total loaned by the big four in 2015 suggests banks were as willing to participate in fossil fuel deals as they have been over the past eight years. 2011 clearly marked an upturn in lending, with the fossil fuel boom at its peak and world operating on the basis that prices were only going to keep increasing. But just because that boom has now turned to bust, it doesn’t mean the lending has slowed down, with projects seeking to become financed and refinanced over again. Find out more about your bank Caught up in the inevitable death of coal

As the most carbon intensive of all energy sources, thermal coal’s days are clearly numbered. Weak international demand is already forcing prices down, pushing many of the world’s biggest coal companies to the brink of bankruptcy.

Now with the Paris agreement set to drive global energy policies with strict carbon limits, there is little doubt that this is an industry in its final death throes.

Australian coal operations have not been immune to the downturn of the industry, a point best exemplified by Whitehaven Coal, whose share price has dropped 94% since 2011. The pure play coal company is responsible for the Maules Creek open-cut coal mine, a horrific example of the environmental and climate damage inflicted by coal and other fossil fuel projects. Yet ANZ, Westpac and NAB still think it is OK to chip in $100 million each to a $1.4 billion refinancing, helping the beleaguered company continue its dirty and destructive operations against the wishes of local residents and the wider community.

The table below show’s each of the Australian coal projects and companies that attracted finance in 2015, and how much each of the big four banks contributed to these dirty deals. The fact that our banks are still willing to expose themselves to the dying coal sector shows a complete disregard for the financial state of the industry, let alone the environmental and climate destruction it is responsible for. 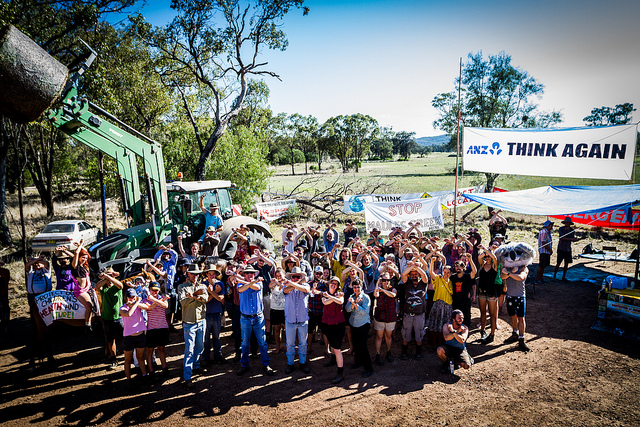 Refinancings of existing loans are commonplace, but 2015 saw a huge increase in the number of deals that were refinancing existing debt. 18 out of 30 deals overall, and 7 out of 8 coal deals were refinancings. The list of coal deals in the table above provides some notable examples.

The increase in refinancings is reflective of the fossil fuel sector coming off a major boom. A number of projects that were financed several years ago are now seeking to find better terms for their debt. Whitehaven coal is a case in point – it had been reported for years that Whitehaven were looking to refinance the debt package for the controversial Maules Creek coal mine. They finally achieved this last year, managing to slightly lower the interest rate paid. But even with Whitehaven refinanced, that didn’t stop at least one of the banks looking to escape the deal shortly after the ink had dried.

The story that isn’t obvious is that when deals get refinanced, they often hit reset on the term of the loan, meaning banks are lumbered with projects that, as is often the case these days, aren’t economically viable. Projects at risk of becoming stranded are at risk of defaulting – not an outcome the banks want – so banks are somewhat compelled to extend and renew the loans to make them easier for the project or its owners to handle.

In short – the banks funded the fossil fuel boom, now they’ll struggle to get out of its bust. And in the case of thermal coal, which many analysts agree is in structural decline, they are renewing their exposure to some very risky projects.

What the banks need to do

Each of the big four banks have publicly supported the internationally agreed aim to limit global warming to less than two degrees above preindustrial levels. But none have detailed how they plan on playing their part in ensuring the limit is not exceeded.

The two degree threshold places a very strict limit on the amount of carbon that can be dug up and burned. The vastly safer but notably more aspirational goal of less than 1.5 degrees shrinks that carbon budget even further. Any project or company that aims to expand or prolong the fossil fuel industry is completely at odds with the desperate need to curtail temperature rise.

Banks must not provide finance to any project or company that would expand or prolong the fossil fuel industry. NAB has ruled out financing the proposed Carmichael coal mine in the Galilee Basin but this is just one mine and just one bank.

Australia’s big banks need to publicly commit to not finance any project that expands the fossil fuel industry, put policies in place that mandate a phase out of their exposure to fossil fuels in line with the carbon budget and demonstrate progress publicly towards this goal each year.

But this will only happen if the public and the banks’ customers are engaged and demand the urgent changes needed from the custodians of our money.