The next six months will be critical for whether Adani’s destructive mega coal mine goes ahead. Thanks to some cost-cutting, on both its proposed railway line and the mine itself, Adani’s Carmichael project is now a far cheaper, and therefore more bankable, proposition.

A smaller initial phase of the mine, a smaller rail line, the potential sale of Abbot Point and a royalty holiday subsidy, free water and free road construction gifted to Adani by the Queensland Government means the Adani Group could fund the rest of the project largely through margin loans using its own wealth as security.

Adani is expressing confidence in its new plan, with Adani Mining Chief Executive Lucas Dow saying on 1 November 2018 that Adani intends to have financial close reached “within months”.

The initial Carmichael mine and rail proposal was for a monster 60 million tonnes of coal to be mined each year and sent to Abbot Point coal port along a 388 km standard gauge rail line wholly owned by Adani. The port was to be expanded by 70% through the addition of another terminal. This had the advantage that any other companies building new mines in the Galilee Basin would need to use Adani’s rail line and port to get their coal to markets overseas.

With a massive community campaign thwarting Adani’s request for a $1 billion taxpayer funded loan and ever diminishing alternative sources of finance, the company has swallowed its pride and dropped this dream, at least for now.

Significantly, this change has almost halved the rail line cost from around $2.5 billion to around $1.2 billion. The total project cost including the mine could now be down to less than $3 billion, less than one fifth the amount of capital required just a few years ago. 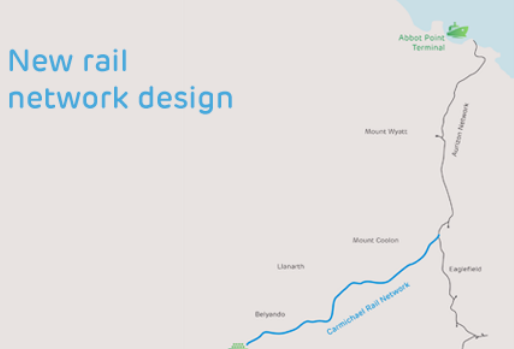 This change has almost halved the cost of the railway to around $1.2billion

Aurizon, as the owner of the rail network Adani would be connecting to, is obliged to consider all access requests and that process is now underway. What Aurizon is not obliged to do is provide the haulage services to transport the actual coal, or to pay for any upgrades the existing railway line may require.

Aurizon is already concerned about the risk of relying heavily on thermal coal for its business and the risk of a community backlash from cooperating with Adani. If these concerns reduce Aurizon’s motivation to smooth the path for Adani, that could increase costs and cause further delays for Adani Carmichael.

One side-effect of this reduction in size of the rail line and port is that it limits the prospects of additional mines in the Galilee Basin being built before expensive infrastructure upgrades would be needed. However, at a time where the climate crisis demands that we phase out coal as quickly as possible, the Carmichael mine alone would constitute a disaster for current and future generations.

Adani has been trying to sell a stake in its Abbot Point coal port for at least four years. This year it hired Rothschild investment bank to advise on the sale. If Adani manages to sell almost half of the port, then it could raise hundreds of millions of dollars in equity which, in turn, could be used to help finance the mine and/or rail line.

The Courier Mail reported in September:

“It [Adani] is understood to be holding talks with Korean finance companies who are interested in buying a stake in the port. It could be done within months.” There is an existing connection between Adani and Korean finance capital. In July, Mirae Asset Daewoo refinanced $330 million of Adani’s debt, acquired when it bought the coal port in 2011.

A document from 2016, uncovered by Market Forces through Freedom of Information rules, also shows the Australian Department of Foreign Affairs and Trade met with the Korean Export Import Bank at Adani’s request. Subsequently, the South Korean Government committed to encouraging investment in the Carmichael project by its finance, engineering and construction companies. A new government in South Korea has since been elected on a platform of reducing coal use domestically. However, it has not yet clarified its official stance on Carmichael.

In response to letters from the Wangan and Jagalingou Traditional Owners, three Korean financial institutions ruled out financing Adani's Carmichael mine, rail line or investing in Abbot Point, prior to a visit by the W&J to Korea.

Read more about these commitments here.

Forbes estimates the Adani family’s net worth to be US$11.9 billion, which is mainly tied up in the various Adani Group companies. Adani could feasibly take out margin loans using its existing shareholdings as security, in order to finance the Carmichael project. Highly risky, this would be a last resort. With 35 financial institutions from Australia, Europe, North America and China having already either ruled out lending to Adani for Carmichael specifically or new coal mines in general, the most likely place for Adani to find a margin loan would be India.

Adani has long touted it’s “pit to plug” strategy, inferring it would control the whole supply chain to deliver electricity to India using Carmichael Coal. But Adani’s major option for sending its coal to India, the 4600MW Mundra power station, is in trouble. Most of its power generating units had been switched off and the Adani subsidiary that owned the power station was contemplating bankruptcy. Increased coal costs and an Indian Supreme Court decision preventing Mundra from increasing its electricity tariffs above those agreed in its power purchase contracts meant that the power station was running at a loss.

However, Mundra’s fortunes may be about to change. In October, a Gujarati Government panel recommended electricity users and state-owned banks pick up the tab for increased coal costs. The Indian Supreme Court has now cleared the way for this outcome, with a decision to be made by the Indian Central Electricity Regulatory Commission before the end of the year. This would enable Mundra power station to return to operating at full capacity, and give Adani a major customer for its Carmichael coal. So “pit to plug” is back on, provided Indian consumers are prepared to pay a higher tariff for power from Carmichael Coal and lenders are prepared to reduce interest rates on outstanding loans.

India is setting the pace globally on low solar power tariffs, with bids for new solar projects going in at ₹2.44 per kilowatt hour (~4.7 cents). To ask the Indian taxpayer and consumer to cover Adani for the cost of their dirty coal is outrageous, especially when solar has already won the economic race.

It's now a race against time.

Despite an eight year delay, a finance sector that is increasingly shunning new coal projects and a global climate crisis, Adani remains determined to build the Carmichael mine and rail line. Having slashed the initial cost of its project by around 80%, Adani has made it a much more realistic and enticing proposition.

But the clock is ticking down to national elections in India and Australia in the first half of 2019. With Adani's close ties to Prime Minister Modi in India, and the Australian Government being one of Adani's greatest champions, Adani's political backing is on the line.

The next six months will make or break the Carmichael coal project.