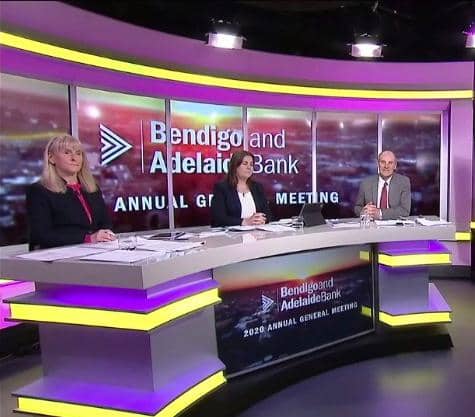 Bendigo and Adelaide Bank enjoys a lot of kudos for being one of Australia’s medium-sized banks that doesn’t invest in fossil fuels. Thousands of Australians have moved to Bendigo Bank as a result of its position on our banks comparison table.

Yet at today’s annual meeting the bank cast doubt over its ability to understand and manage climate risk, as it apparently backpedaled its claim to have already conducted scenario analysis on the impacts of climate change on the agricultural sector.

Earlier this year, Bendigo Bank finally stated its support for the Paris Agreement, which was signed and endorsed by its major competitors nearly five years earlier.

Bendigo’s belated support followed multiple questions on the topic from shareholders, including at last year’s AGM, where the bank was also asked whether it had conducted scenario analysis on the impacts of climate change on the agricultural sector. In response to that question, Chairman Robert Johanson told shareholders the bank had done that work but that it isn’t publicly available.

Given Bendigo Bank’s significant exposure to the agricultural sector, and that its annual report recognises climate change as a material business risk, the bank’s failure to publish this information is contrary to the recommendations of the Task Force on Climate-related Financial Disclosures (TCFD).

Noting Johanson’s comments at the 2019 AGM and that Commonwealth Bank has disclosed such analysis, one shareholder asked whether the scenario analysis had been published yet, and how shareholders are supposed to know whether their exposure to the agriculture sector is safe.

Evidently the shareholder was equally puzzled, and followed up by asking Bendigo to account for the discrepancy and advise when the analysis will be disclosed.

In light of Bendigo’s recent promise to “expand our climate related disclosures beyond our decade long involvement with the Carbon Disclosure Project (CDP) through additional frameworks such as the Taskforce on Climate Related Financial Disclosures (TCFD)”, another shareholder asked when the bank plans to fully implement the TCFD’s recommendations.

Hey reiterated that the bank would publish the scenario analysis at an unspecified future time, but failed to say when Bendigo would adopt all of the TCFD’s recommendations.

Bendigo Bank’s most recent submission to the Carbon Disclosure Project (CDP) shows that the bank has adopted targets covering its Scope 1, 2 and 3 greenhouse gas emissions. However Bendigo doesn’t appear to disclose targets to manage the carbon intensity of its lending portfolio. One shareholder asked whether the bank had such targets.

Hay dodged the question, failing to address whether Bendigo had such targets and instead telling shareholders that Bendigo would disclose climate change scenario analysis. Scenario analysis and targets to manage exposure to carbon emissions are two different concepts, which were conflated in Hay’s answer.