New Hope’s record of fuelling climate and community destruction through coal mining, and the financial institutions enabling it.

New Hope is an Australian-based undiversified coal mining company deriving more than 95% of revenue from the sale of thermal coal.

Despite there being no room for new or expanded coal mines if we’re to achieve the climate goals of the Paris Agreement or net zero emissions by 2050, New Hope is pursuing a major expansion of its New Acland coal mine on some of Queensland’s best farming land.

According to the International Energy Agency (IEA), reaching net zero emissions by 2050 means no new coal mines or expansions can proceed. Meanwhile, scientists are clear that limiting global warming to 1.5ºC means 95% of Australia’s coal must stay in the ground.

New Hope was funded by a group of five Australian and international banks via a $600 million loan in 2018. Most of Australia’s top 40 super funds are also yet to rule out investment in New Hope. Many of these financial institutions claim to support the Paris Agreement and goal of net zero emissions by 2050 yet have continued to support a company pursuing new coal projects inconsistent with these goals.

As the latest climate science makes clear, there is no time to waste. It’s time for these banks and super funds to walk away from New Hope.

Send a message to the banks funding New Hope​: Protestors rally outside Queensland’s parliament against the New Acland coal mine expansion. Credit: Lock the Gate

Banks that have loaned to New Hope

In November 2018, a group of five lenders provided a $600 million loan to New Hope, a company still pursuing expansion of the climate-wrecking coal industry. Concerningly, their policies fail to prevent providing further funding to New Hope.

[1] It is unknown how much each bank committed to the loan. If it’s assumed the $600 million loan was evenly split among the lenders, each lender would have committed $120 million. [2] To qualify, the bank must have ruled out providing any finance for New Hope through an on-record public statement (e.g. policy document, media release, public comment in an article etc). [3] While ANZ and Mizuho have ruled out finance for new thermal coal mining projects, the banks have failed to rule out funding for coal companies such as New Hope. (While NAB claims it will no longer fund new thermal coal mining projects, it has breached this policy and in any case remains open to funding coal companies such as New Hope.) Any lending to New Hope, whether characterised as being for new or existing projects, supports an undiversified coal miner pursuing new coal projects.

Super funds failing to rule out investment in New Hope

Despite several of Australia’s biggest super funds having divested from New Hope, 26 of the top 40 funds by assets under management have failed to publicly disclose any fund-wide divestment or exclusion of coal companies (or plans to do so). A further three funds have policies in place that would likely see a reduction in investment exposure to coal companies like New Hope, but these policies are not fund-wide exclusions.

Is your super fund one of the laggards that still hasn’t ruled out investment in New Hope? Check the list below and take action! You can also find out more about super funds’ investments in coal, oil and gas companies via our super funds comparison table.

Tell your super fund that it must rule out investment in New Hope: The current state of climate science means we should be aiming for net zero emissions far sooner than 2050 if we want to limit global warming to 1.5ºC. To achieve this goal, 95% of Australia’s coal reserves must stay in the ground and global coal production must decrease 11% each year between 2020 and 2030.

These coal reserves are in addition to New Hope’s near 150 million tonnes assessed for the company’s existing Bengalla coal mine, which is licensed to extract up to 15 million tonnes of coal per year until 2039.

New Hope’s coal expansion plans are clearly inconsistent with the goal of net zero emissions by 2050 and the Paris Agreement’s 1.5°C warming limit. Mining operations at the Bengalla mine. Credit: D Sewell

New Hope derives more than 95% of its revenue from the sale of thermal coal (i.e. coal burned to produce electricity), despite its own claims to be a “diverse” energy company. At the company’s 2021 annual general meeting, New Hope’s chairman confirmed the company’s intention to continue sourcing this level of revenue from coal by 2030.

Almost 80% of the countries where New Hope’s customers are based, mostly in Asia including Japan and Taiwan, have now committed to achieve net zero emissions by 2050. According to the International Energy Agency, reducing emissions to net zero means unabated coal use (i.e. coal-fired power generation that doesn’t rely on speculative carbon capture and storage technologies) must fall by over 98% between 2021 and 2050. These net zero commitments therefore pose an existential risk to New Hope’s business model.

However, in an apparent failure of climate risk management, New Hope did not refer to the IEA’s net zero scenario even once in its 2021 Sustainability Report. Instead, New Hope refers only to the IEA’s Stated Policies Scenario (consistent with around 2.7ºC of global warming) and Sustainable Development Scenario (consistent with net zero emissions by 2070).

The New Acland Stage 3 expansion is one of the most contested coal mining projects in Australian history.

The mine is situated in Queensland’s fertile Darling Downs, on and around land considered as among the best 1.5% of agricultural land in Queensland. New Hope’s Stage 3 expansion would dig three vast new coal pits, destroying land that has sustained generations of dairy and cattle farmers.

Aside from the physical destruction of this prime farming land, there is deep community concern about the impact of the mine on local groundwater aquifers. According to the Oakey Coal Action Alliance, around 20,000 hectares of cropping land surrounding the mine is at risk of permanent groundwater impacts. Despite several rounds of water modelling revisions, expert scientists remained unconvinced by New Hope’s final water management plans.

Large coal mines pose a huge threat to our water sources. At a time when droughts are being turbo-charged by global warming, there is no justification for allowing massive new coal pits on prime agricultural land. Splashing out to promote climate-wrecking coal

Data released in May 2021 shows New Hope splurged over $650,000 on the 2020 Queensland election. The bulk of the company’s expenditure was on advertising, marketing and public relations advice, as New Hope appeared to seek to pressure the Queensland Government to grant approvals for an expansion of the New Acland coal mine.

This isn’t the first time New Hope has engaged in political spending while seeking approvals for coal expansions. Between 2010 and 2013, while the company was seeking initial approvals relating to New Acland Stage 3, New Hope and its then parent company Washington H Soul Pattinson donated a combined $700,000 to the Queensland Liberal National Party and the federal Liberal Party.

The influence of fossil fuel corporations like New Hope over our democracy is wrecking our climate. Market Forces’ analysis has consistently revealed fossil fuel companies are huge donors to Australia’s political parties. New Hope’s operations at New Acland have a history of breaking environmental laws. In 2018, the company was fined by the Queensland government for drilling 27 illegal water bores. In 2020, documents obtained under freedom of information laws revealed New Hope had been caught breaking noise limits on its operations 34 separate times in a 10 week period. As of December 2021, New Hope remained under investigation by the Queensland Government for allegedly mining $500 million worth of coal outside its approved open-cut pit boundaries.

This dirty coal corporation simply can’t be trusted – with our climate, water or environmental laws. It’s time for New Hope’s banks to walk away. 21 July 2022 In response to member concerns over their super fund’s investments in climate wrecking companies, funds often point members to their ‘sustainable’ investment options. However, new analysis from Market Forces reveals some of these options are failing to... 12 May 2022 Global investment management firm Vanguard recently released its 2021 Investment Stewardship Report, where it discusses the supposed impact of its engagement with the companies in which it invests.  Vanguard provides case studies on the Adani Group (p 36)... New Hope Corporation doubles down on coal during farcical 2021 AGM 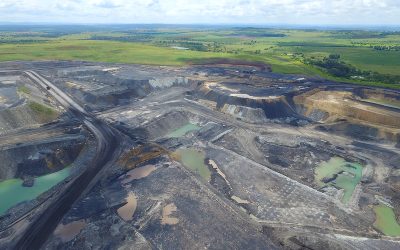 21 July 2021 Australian coal company New Hope has a track-record of dodging questions about the material financial risks to its business from climate change. That’s why this week EDO Australia, on behalf of Market Forces, wrote to the Australian Securities and...

11 June 2021 Data released last month shows that coal company New Hope splurged over $650,000 on the 2020 Queensland election, ranking fourth on a ‘big spenders’ list headed by Clive Palmer’s Mineralogy Pty Ltd [1]. The bulk of the company’s expenditure was on...

Disclaimer: This site is intended to convey factual information about New Hope. It is not intended to provide financial product advice. You should obtain independent advice before making any financial decisions.