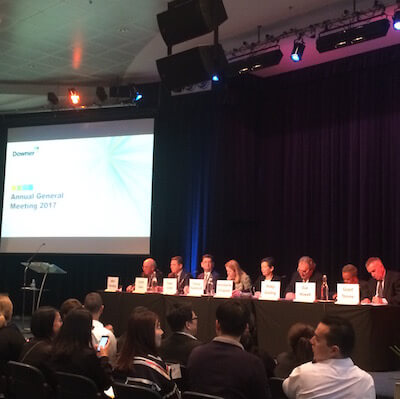 The board of Downer EDI today came under intense pressure from shareholders at its Annual General Meeting (AGM) over the company’s relationship with Adani and the planned Carmichael coal mine.

In an unprecedented move that suggested the board wanted the meeting over and done with as quickly as possible, the chairman Mike Harding didn’t make an opening address (other than formalities), and CEO Grant Fenn’s speech fell well short of 10 minutes.

Despite asking shareholders to save questions on the Adani mine to later in the meeting, the board was immediately asked about the news that Adani and Downer had sought support from Chinese company China Machinery Engineering Company (CMEC), as reported by the ABC this morning.

CEO Grant Fenn attempted to deflect the question by suggesting that he himself hadn’t met with CMEC. While that may be true, this CMEC media release in January suggests that his direct report David Overall did indeed meet with the company.

And yet the board refused to shed any more light on the nature of that meeting with CMEC and what impact that may have on Downer’s role in the Carmichael project.

Take action to keep your super out of Adani’s mega coal mine!

The shareholder resolution on climate change, filed by Galilee Blockade, received 3.27 per cent of the vote, but also a notable abstain vote of roughly 2.5 per cent. A vote of close to 6 per cent in a $4 billion company is an achievement, and will not go unnoticed in the investment community.

Asked whether the board had considered the significant climate and reputational risks associated with the Carmichael coal mine, Downer Chair Mike Harding replied that all projects of greater value than $250 million were considered at board level. Perhaps the board thinks that the #StopAdani protests sweeping the nation will eventually die down, or that in 20 years they could not possibly be held accountable for their role in the climate crisis. Either way, it seems like false confidence.

95-year-old Kokoda veteran and serial thorn in the energy industry’s side, Bill Ryan, asked the board what they would do to stop him from blocking the construction of the Carmichael mine. The chair and his board simply shrugged.

Concerned shareholders continued to pepper the board with questions about their relationship with Adani, the environmental impact of the Carmichael mine, and their understanding of climate. At one point, CEO Grant Fenn said that if a project has both state and federal approval, they will proceed and “that’s the way it is”. It is unclear however, whether the board understands that neither the Queensland nor the Federal governments considered the potential emissions of the Carmichael mine before approving it.

A couple of shareholders took the contrarian view to the room, suggesting the usual straw man arguments such as “we can’t just stop using coal tomorrow” and “how will 300 million Indians get electricity”, which were widely ridiculed.

In what may be the shortest AGM of an ASX100 company we’ve ever seen, Chair Mike Harding called time on questions just short of an hour after the meeting had commenced. This was despite scores of shareholders still demanding answers, who soon enough commenced singing in protest.

The Downer board probably got what they wanted from today’s meeting – it was over quickly without giving away too much to shareholders.