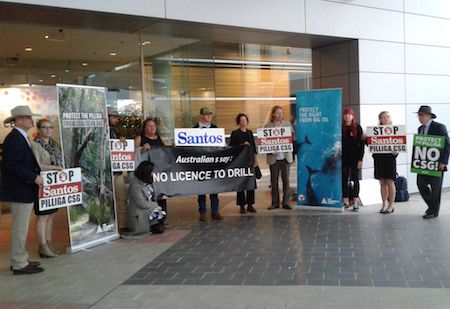 Gomeroi traditional owners and farmers from Narrabri made it very clear today at Santos’ annual general meeting (AGM) that they do not want Santos to go ahead with its unconventional gas project in the Pilliga Forest (known by traditional owners as the Billiga).

Farmer Adam Macrae explained the threat the project poses to the Great Artesian Basin - the biggest underground water source in the world - and confirmed the community will ‘stop at nothing to stop this project dead in its track.’

Thank you to everyone who contributed to our crowdfunding campaign to enable the Narrabri locals to attend the AGM and ensure the Santos board were held accountable to community members they have been ignoring for months.

As Gomeroi traditional owner JudyKaye Knox stated: ‘Santos have not met with the Elders and the Gomeroi people who have repeatedly voiced their concerns and have been ignored… I asked the chairperson to please explain to shareholders why Santos continues with business plans to destroy culture and heritage.’ The Santos board denied this.

Narrabri community members warned there was unprecedented opposition to the Narrabri gas project amongst many groups throughout the region. According to surveys, 97% of people oppose the project in the five shires that span Narrabri. AGM attendees also warned that the project may become a liability rather than an asset.

The community action at today's AGM flies in the face of Santos' claims that the company consults and works with community groups.

A resolution coordinated by Market Forces and lodged by 115 shareholders asked Santos to disclose its fugitive methane emissions, which are the emissions that escape during the drilling, extraction and transportation process of natural gas.  As Daniel Gocher explained to the board, methane causes 86 times more warming than CO2 over a 20-year timeframe.

According to the Melbourne Energy Institute "the methane-emission threshold at which point using gas for electricity generation provides no benefits over using coal occurs at a methane-emissions level equal to 3.2 per cent of total gas production". By failing to adequately disclose its methane emissions, Santos calls into question its assertion that gas is a cleaner energy source.

The shareholder resolution received support from shareholdings worth roughly $1.2 billion, despite the board recommending a vote against the proposal.

Kevin Spence acknowledged that "we can’t ignore what we are hearing from shareholders", and committed to more methane disclosure in the 2019 Climate Change Report, though didn’t commit to measuring the company's entire methane emissions.

It was also acknowledged that last year's shareholder resolution - also coordinated by Market Forces - was one of the reasons behind the Santos 2018  Climate Change Report.

Shareholder engagement around climate change is gaining traction, but many super funds are still failing to take their opportunities to support climate action.