The huge ongoing problem of governments around the world pumping hundreds of billions of dollars into fossil fuel production has been brought back into the spotlight by a new report published by US-based Oil Change International and the UK’s Overseas Development Institute.

Titled Empty promises: G20 subsidies to oil, gas and coal production, the report exposes some US$452 billion (approximately AU$635 billion) worth of annual handouts to fossil fuel producers from the governments of the worlds 20 richest nations. Just to help that sink in – that’s over $600 BILLION EACH YEAR! And to put that almost incomprehensibly large number into a bit of context, the report puts total global government spending on renewable energy at just US$121 billion a year.

As nations prepare to meet in Paris at the end of the month to discuss strategies aimed at avoiding the worst effects of the climate disaster that we are currently tracking towards, this report serves as a timely reminder of the sort of international political action we need to see.

Cancelling subsidies – which the G20 have been ‘committing’ to phase out every year since 2009 without actually doing anything – would make the exploration and development of fossil fuel reserves even less profitable, and even up the playing field for renewables to take over market share even faster than they are at the moment.

Oil Change International and the Overseas Development Institute’s research puts Australia’s total annual subsidies for fossil fuel production and exploration at a staggering $5.6 billion. But we’ve taken this a step further and included all the money our government currently spends on encouraging fossil fuel consumption to arrive at a total figure closer to $12 billion per year. Check out our newly updated fossil fuel subsidies pages to see how this number breaks down.

On top of the tax-based subsidies in the Australian federal system, we also have information on the hundreds of millions of dollars of public finance that is provided to the fossil fuel industry each year via our national export credit agency, EFIC, and our role in international financial institutions. You can also read up on the various ways Australian federal and state governments directly support and contribute to the fossil fuel industry. 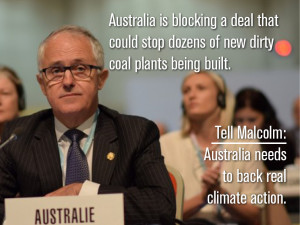 Finally, it’s important to remember that the Turnbull government is currently trying to block a move by the OECD nations that would prevent them from financing highly polluting new coal power plants. Again, Australia’s love affair with the dying coal industry is putting us at odds with the international community, showing us to be a long way behind the pack when it comes to meaningful climate change action.

Click here to read more about this issue and sign our petition telling Prime Minister Turnbull to support the deal that would stop highly polluting coal plants from being built.