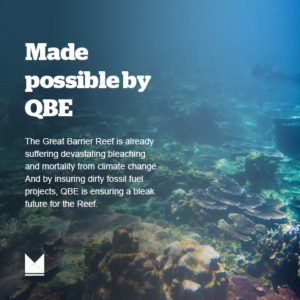 Market Forces representatives attended the QBE AGM in Sydney on Wednesday. QBE is the largest insurer in Australia by market capitalisation, and operates across 37 countries employing over 14,000 people. QBE is also a critical ally to the fossil fuel industry – it underwrites offshore oil rigs, gas storage and pipelines and coal mine construction.

Earlier this week, we rebranded QBE’s head office with images of a bushfire, bleached coral reefs and a coal mine, using their own slogan – Made Possible By QBE. The company provided the idea themselves, back when they thought using the image of a coal mine on their 2012 annual report was a good idea.

Market Forces had submitted questions in advance to the company, none of which were addressed in lengthy speeches by the Chairman Marty Becker or CEO John Neal. You can see these questions in full down the bottom of this post.

Neither the Chairman or the CEO mentioned climate change in their addresses, or the impact it was having on their business. Check out our ‘highlights reel’ of the questions we put to the board during the meeting below.

Our first volunteer, Jann, asked if QBE have refused to write insurance in areas repeatedly affected by storm and flood. John Neal replied that this issue wasn’t isolated to Australia – areas of the UK had suffered frequent flooding in the last few years. Though they hadn’t ruled out any area entirely, many areas had seen significant increases in premiums.

Jann’s second question related to political donations – this year QBE appeared on the Australian Electoral Commission register of donations for the first time since 2009/10. John Neal claimed that these weren’t specifically donations, but fees paid to attend an event with a politician. The question remains – why do QBE representatives attend political events in a corporate capacity?

Our second volunteer, Peggy, asked if QBE had considered the risks outlined by the Bank of England’s landmark report on insurance and climate change in 2015. The answers provided were suitably evasive, and John Neal completely ignored the part about reporting these risks to shareholders.

Peggy followed up with a question about why QBE had failed to sign an open letter to the Bank of England Governor urging tough action on climate change. John Neal said the company preferred to expend their energy lobbying government on climate change, rather than penning letters to newspapers. Peggy clarified that the letter was to the Bank of England, not a newspaper, which John Neal then ignored.

Our third volunteer, Andrew, asked about underwriting standards on offshore oil given that QBE had paid out on large PEMEX and Petrobras claims in 2015. QBE had previously paid out on the BP Deepwater Horizon disaster in 2010. John Neal inadvertently answered one of our pre-submitted questions by declaring that energy constituted less than 2% of the company’s revenue. He said that the company prefers to work with businesses that consider their environmental impact, and those that are willing to change. We’d argue that BP doesn’t fit that criteria. John Neal clarified that QBE didn’t underwrite BP directly, but as the company did pay out on the Deepwater Horizon spill, it must have underwritten a consortium of which BP was a part, or one of its partners in the Gulf of Mexico, like a drilling services company.

Andrew followed up by asking if QBE had any involvement in the exploration for and potential production of oil in the Great Australian Bight. John Neal replied that the company didn’t have any involvement – to his knowledge – and if it did, it would be small. This was not a conclusive answer. As the open session drew to a close, I got the final chance to put the board on the spot. I referred to the CEO’s earlier comments by asking which specific climate policies the company had lobbied for. John Neal replied that QBE had been heavily involved with the Insurance Council of Australia – a group that hasn’t published a report on climate change since 2010. He also said they’d begun to see results of their efforts in the UK with flood mitigation. I then asked if it was just about mitigation rather than emissions reduction. John Neal said it was both, but didn’t refer to any specific policy initiatives.

My final question referred to the California Insurance Commissioner’s call for coal divestment and mandatory fossil fuel exposure reporting. John Neal was quite adamant that in California, thermal coal exposure was zero, across the entire portfolio it was less than 1%, and the company had no intent to increase that amount. This equates to $300 million – a substantial investment nonetheless. CFO Pat Regan then said that they had recently appointed a Responsible Investment Manager and were making advances with green bonds. John Neal then said progress was slow because the green bond market was so small. I then asked if they would make a specific allocation (for green bonds or renewables) in their infrastructure portfolio. He replied that they haven’t been able to get close to their allocations yet – meaning there simply aren’t enough investment opportunities in the renewables space. We find this hard to believe.

On my way out, CEO John Neal offered a meeting, which was very welcome. We have many questions that remain unanswered after some evasive responses. QBE must begin to acknowledge and disclose the significance of their role in the fossil fuel industry. QBE can take immediate, costless action – by joining the public conversation on the appropriate policy responses to climate change.

In today’s Australian Financial Review, John Neal was quoted as saying that climate activists’ voices were “important” in the climate change debate. “We share their sentiment, but it’s the way in which you go about tackling the problem [that is different]. I would encourage them to keep protesting because I think their voice is important”.

We began the week on a crisp morning in Sydney’s CBD with a couple of posters and a team of enthusiastic volunteers – it has now concluded with the CEO of a top 50 Australian company encouraging our fight against fossil fuels. We’d call that a partial victory. Now we want to see real action from QBE.

We’re calling on QBE to:

– Unequivocally rule out future underwriting of coal, gas and oil production, transport and infrastructure projects;
– Divest from fossil fuel assets in its investment portfolio, and use that money to invest in renewable energy; and
– Take a leading role in the public debate on climate change, calling for action from Australian governments and businesses to limit global warming as much as possible.

These are the pre-submitted questions that QBE failed to answer: