2016 was the first full year after the Paris agreement was signed, and since Australia’s big banks all committed to support the goal of holding global warming to well below 2ºC.

So, how exactly did the banks go about backing up their 2°C commitments last year?

Well, with almost $10 billion loaned to dirty fossil fuels between them, the big four clearly failed to turn their promises into action in 2016.

While big four fossil fuel lending last year was slightly lower than the previous three years, it was still well above four of the five years from 2008 to 2012. So while these latest figures hint at transition, the decline is nowhere near sharp enough to signal a clear break from business as usual.

Click here to learn more about what 2°C means for the big banks, and how they are measuring up.

Total lending to fossil fuels in 2016

Take action! Click here to put your bank on notice over their dirty fossil fuel lending

When challenged on their sustainability credentials, the big banks like to talk up renewable energy lending. But in 2016, the big four loaned three and a half times as much to dirty fossil fuels as renewable alternatives.

ANZ had by far the worst energy lending ratio, handing out $14.40 to dirty fossil fuels for every dollar loaned to renewables.

Providing $3.9 billion to fossil fuels, Commbank’s lending was the highest in total. But the bank’s dirty to clean ratio was an improvement on ANZ, due to $846 million in finance for renewables.

Westpac gave lie to its claims to be a sustainable institution by lending $1.5 billion to fossil fuels, compared to just $426 million to clean energy.

While NAB’s almost even lending ratio looks impressive compared to the other banks, it still demonstrates too much support for outdated and destructive industries.

Examples of dirty deals in 2016

The carbon budget imposed by the Paris agreement leaves no room for new fossil fuel infrastructure. In fact, some currently-operating power stations, mines and transportation projects will have to close before the end of their economic life if we are to have a fighting chance of achieving a stable climate future.

Ichthys is one of Australia’s greatest examples of a fossil fuel project that is completely at odds with the aims of the Paris agreement.

The gigantic – and expensive – development will take gas from the Browse Basin off the north coast of WA and process it to be transported and burned in Japan.

Following cost blowouts in construction, Westpac in May 2016 provided $82m in additional project finance, which will help facilitate the up to 8.9m tonnes of LNG production per year.

On top of the immense scale of gas production and the eventual CO2 emissions from burning it, the liquefaction process is also incredibly emissions-intensive, while the dangers associated offshore production and pipelines are significant.

The ships will be used to transport ethane from the United States to India, and will be the largest of their kind in the world.

Such mammoth scale fossil fuel infrastructure is likely to lock in decades of emissions in India, and encourage further gas production in the States.

Also in October 2016, ANZ  loaned AU$61m to help build an 800MW gas power plant in Indonesia, which is likely to lock in decades of dirty CO2 emissions.

Commbank gave the world a Christmas present on 22 December last year that was something like the proverbial lump of coal. The bank’s estimated $154m of finance to build a new 1,438MW gas power station in Pennsylvania, USA. It is estimated that the Lackawanna power plant will emit around 77.5 million tonnes of CO2 during its lifetime.

On top of this, the plant’s gas will be supplied by Cabot Oil & Gas, a company infamous for its negligent fracking activities, which contaminated drinking water in a small Pennsylvania town.

Just a day before the Lackawanna deal, Commbank provided $51m to an oil and gas company to help finance expansion of their exploration activities in Norway and the UK. Clearly Commbank remains committed to facilitating the expansion of the fossil fuel industry, regardless of the destructive climate, environmental and health destruction impacts.

NAB’s $67m loan to build a new gas power station in Connecticut, USA, is a major blemish on the bank’s 2016 lending record. With a capacity of 785MW, the Towantic project is likely to emit more than 40m tonnes of CO2 during its life, and will also require the construction of a new interconnection pipeline for its gas supply.

Given the prevalence of unconventional gas production throughout the US, it is likely the project will encourage the dangerous and dirty industry to expand even further.

Take action! Click here to put your bank on notice over their dirty fossil fuel lending

Coal finally falling out of favour?

Total coal lending by the big four banks in 2016 fell below $2b for just the second time since 2008. Coal lending has steadily decreased each year since 2013, suggesting the banks may finally be getting the message that coal power has no place in a stable climate future.

Big four lending to oil and gas has also been decreasing each year since 2013, however the drop off has been far less pronounced than in coal lending.

In fact, the big banks haven’t financed a deal that expanded the coal industry since early 2015, when NAB loaned $63m to expand the Chain Valley Colliery Coal Mine in NSW and the other three banks chipped in to a $570m loan to allow the Maules Creek Coal Mine to be completed (ANZ $220m, NAB $225m, Westpac $125m).

While the trend is clearly in the right direction, it is difficult to be confident that it will continue without clear policies from the banks. Seven major international banks have so far excluded any finance to new coal projects, while four won’t lend to any new coal plants. Many more have partial coal lending exclusions. 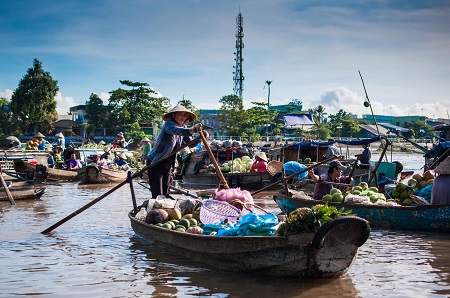 ANZ has ruled out providing finance to any coal fired power plant that would emit more than 0.8 tonnes of carbon dioxide for every megawatt hour of energy produced. While this is a far from an ideal emissions threshold, and we would advocate for a complete ban on funding any new fossil fuel based power stations, the policy has caused ANZ to withdraw from financing a project in Vietnam.

We need to see strong policies from all the big four banks, completely ruling out any further lending to new coal projects. They must also commit to rapidly managing down their fossil fuel exposure, beginning with coal.