The Callide C coal-fired power station in Central Queensland has gone into receivership after failing to make a $50 million payment on its debt which expired last month. Several news sources, including the Australian Financial Review, are reporting the development but what has so far gone unnoticed is the scale of NAB’s involvement in the deal.

The debt package of ~$350 million was signed in June 2012 and had a term of 4 years. The list of banks involved in the deal are as per the table below.

Given that the reporting indicates US Private Equity firm KKR are now among the lenders, it is likely that KKR has taken on the role of Bank of Scotland and there might also have been a redistribution of the debt among the lenders.

That said, NAB is still by far the most exposed bank in this deal and when we read in the AFR story that:

“It is understood one of the lenders demanded a large repayment on the debt which the IG Power (Callide) shareholders were unwilling to make.”

it is hard to look past either the likely aggressive KKR or NAB, the bank with the most to lose.

On the one hand, we could credit NAB with refusing to refinance this deal which has, in part, led to the power station going into receivership. However, for a bank that has been trying to establish its credentials on climate change, taking a financial hit on a project that is about as far from climate friendly as you could get is not a good look.

Getting coal exposure to zero

The only positive here for NAB in terms of their climate change response is that they are likely to soon be that little bit less exposed to thermal coal. Market Forces released a study recently that showed how Australia’s big coal banks could be coal free in just five years simply by letting existing loans to coal run their course and refuse to refinance any deals. 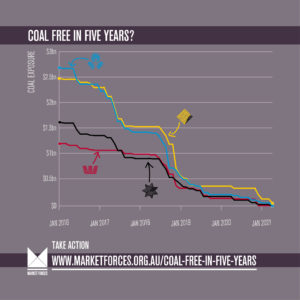 This is a particularly ugly example of banks reducing their exposure to coal but given the industry’s bleak outlook and the need to urgently decarbonise our economy, we can expect a lot more of these deals ending in tears for the banks. ANZ has already written down close to $1 billion of bad deals to the resources sector this year, many of them to the coal sector.

Where to from here?

While this financial distress won’t stop the power station from running in the short term, the next step for the banks will work out how to handle the insolvency of the plant’s owners. NAB and co could find themselves the proud owners of a loss-making coal fires power plant, locked into supply contracts with the less than $1 million company Batchfire Resources, who managed to acquire the Callide mine from Anglo American earlier this year for what we assume was more or less $1.

In any case, it’s a messy future for the banks who have extended credit to Callide C, and hopefully a lesson learned for any bank looking to remain supportive of coal-fired power.